For this month’s featured food pairing we teamed up with Cafe Katja,  owned and operated by Chefs Erwin Schroettner and Andrew Chase, located in the heart of NYC’s Lower East Side. Cafe Katja is a rustic, homey gem modeled after the year-end farmer’s markets, Buschenschanks. The cafe is centered around the concept of “new Austrian” cuisine and that’s no wonder given the fact that Chef Erwin Schrottner emigrated to the US from Austria to fulfill his culinary dreams. Schrottner and Chase worked closely together for many years before deciding to venture into business together.

Cafe Katja features delectable Austrian cuisine at an affordable price. Although, the restaurant has a major focus on their imported beer selection, Cafe Katja also has a great wine list featuring many Austrian wines.

For this month’s food pairing, Erwin and his partner in crime Andrew cooked us up a special treat for fall/Thanksgiving: Coriander Glazed Duck Breast with Acorn squash and Quark Dumpling in White Peppercorn Sauce with Blaufränkisch from Peter Schandl J.

Here are the recipes: 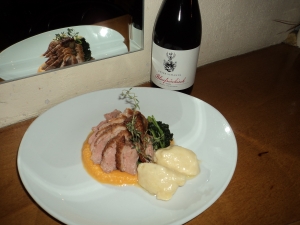 Mix the honey with thyme and coriander.

Heat a large ovenproof skillet. Using a sharp knife, score the duck skin in a cross-hatch pattern and season with salt and pepper. Add the duck to the skillet, skin side down, and cook over low heat until the skin is golden, about 20 minutes. Spoon off the fat as it accumulates in the pan. Turn the duck over and brush the skin with the coriander glaze. Transfer the skillet to the oven and roast the duck for about 6 – 10 minutes, until an instant-read thermometer inserted in the thickest part of a breast registers 135°. Let the duck rest for 5 minutes, then transfer to plates.

In a medium mixing bowl, whisk the eggs, salt, pepper and nutmeg into the quark with a whisk then stir in the flour with a rubber spatula. Mix everything thoroughly, cover with plastic film and set in the refrigerator for at least an hour.

Fill a large saucepan 3/4s of the way with water and salt it moderately; about ½ what you would use if you were cooking pasta. Bring to a boil then turn down the flame. With a soup-spoon dipped in water, scoop up spoonfuls of batter and drop into the water. Turn flame back up and cook at a simmer for approximately 7-9 minutes, turning the dumplings to make sure they cook evenly. The dumplings should feel firm, cut one in half to be sure they’re cooked. Lift out the dumplings with a skimmer or strainer and place on a large plate or cookie sheet and set aside.

Cut the pumpkin in half, stem to base. Remove seeds and pulp.

Season with salt pepper and cinnamon. Cover each half with foil. Bake in the preheated oven, foil side up, 1 hour, or until tender. Scrape pumpkin meat from shell halves and puree in a blender. Strain to remove any remaining stringy pieces.

2006 Blaufränkisch from Peter Schandl J in Burgenland. Here are the winemaker’s notes: Blaufränkisch, also called Lemberger, is a wide spread, with late ripening, red wine variety in Austria. Its wines have a fine race and fruity varietal bouquet; its best form is after the second or fourth aging year. Very aromatic, spicy elegant, fine tannin, cherry.

Great company for this dish – the spiciness pairs with the coriander glaze on the duck breast and pumpkin puree while the tannins hold up to the oily character of the duck and cheesiness of the dumplings.

Why not mix it up for Thanksgiving this year and try this out?