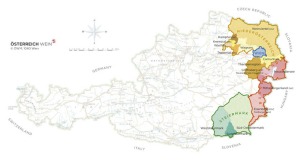 The region has three major climactic zones: The Weinvertel, the region along the Danube river with adjoining valleys west of Vienna and a warmer, Pannonian climate in the south-east of the Niederösterreich.

Gruener Veltliner is the most widely grown grape of the region accounting for 44% of the area’s production, but Riesling, Roter Veltliner and other white varietals are very prominent here as well. Red varieties such as Pinot Noir, Zweigelt and Blaufränkisch are more popular in the areas closest to Burgenland such as Carnuntum.