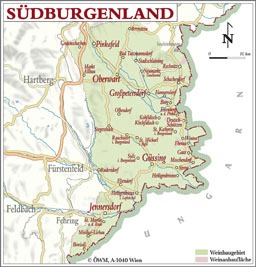 In Eisenberg DAC (also known as Südburgenland) Blaufränkish is king among the regions 498 hectares. Although there are other grapes grown in this region, only wines made from the Blaufränkish may be labeled under the DAC classification. The red wines here present a distinct minerality and notes of spice whilst white wines coming from this region, though labeled with the generic appellation, Burgenland, are known for their vibrancy and elegance.

The region is located far from the more traditional winemaking towns so it is generally referred to as an “insider’s tip.”  This is suitable because unlike many other wine-making areas in Austria, few winemakers are dedicated to this craft full-time. Most have other professions and are making wine solely for the pleasure and/or for a supplemental income. In accordance with that, a vast majority of the wines are consumed locally in traditional Buschenschank wine taverns. Despite these factors, however, Eisenberg is regarded as being an ideal place or grape growing and winemaking.

In this region you will find a Panonian climate as well as some influences from their neighbors to the South, Styria. The most famous vine growing area in the region is the Deutsch-Schutzen vineyards that grow on the historically significant, Eisenberg Hill. Here the soils are rich with iron which accounts for the mineral aromas and flavors in the wines which is unique to this region.

White wines in the region are most commonly produced from Welschriesling and Pinot Blanc and are characteristically crisp and fruity. Other grape varieties can be found throughout the region, including a specialty hybrid grape that produces aromas of wild strawberries.

A little more about the DAC:

Klassik (min12.5% abv): Must be submitted before June 1 of the year following harvest and available to the consumer for Sept. 1 of the same year. Typical character: Fruit-driven with notes of mineral and spice. Little or no oak presence.

Reserve (min 13%abv): Must be submitted Jan. 1 of the second year following the harvest and released by March 1 of the same year. Typical character: Fruit-driven with mineral and spicy notes, full-bodied and matured in traditional oak casks or barrels.